Most Hull citizens will be unaware that Hull has an ancient street called Finkle Street, especially as it no longer even has a street sign. I however, have had a long-standing interest in the old town street, partly due to an old friend, but mostly by virtue of its unusual name, which always caught my eye when looking at old maps and plans of Hull – as do many of the other old street names – but that’s another story.

What remains of Finkle Street runs north to south from the busy dual carriageway that is Castle Street (formerly Mytongate) to a junction with Blanket Row, another ancient Hull street. Originally, Finkle Street extended further south beyond Blanket Row to the Humber bank, and this southern section curved to the west, at an angle to the rest of the street. Streets or roads with bends such as this were often named ‘Fenkl’, which derives from a Norse word meaning a bend or even an elbow, which over time has become corrupted to Finkle Street. However, the street was first recorded as Hale or Hales Street in the Hull Corporation bench books, from the early 14th Century, and property deeds confirm its existence at that date. The bench books record rentals paid to the corporation, and show that in 1347 the street was divided into at least 11 plots.

It is worth noting here that at this period in Hull’s history there were no actual roads leading into Hull, and most transport was by water into what was still a very newly developed town. Hence much of the town was developed from the south and west first – nearer the rivers and transport facilities.

This earliest of names referred to the ‘Hales’, an area of waste ground to the south and west of Holy Trinity church. Hale Street (Finkle Street) led to the Hales from the Humber. The vacant plots in the Hales had been set aside for a market area but this never came to fruition; at that time the ‘Hales’ land was valued at £4 - 3s. There was also an alley off Market Place named Hales Entry, and a churchyard for Holy Trinity was built on land in the Hales during 1301. The other vacant plots in this area had been allotted to tenants by 1295 but not yet built upon. In 1304, under orders from King Edward I, the remaining plots were let.

Early references to Finkle Street are difficult to establish, as the old Hale Street also appears to have stretched much further north, beyond the line of Mytongate. Confusion also arises when both Finkle Street and Hale Street are mentioned in the same period, as it appears that a section of the old street retained the old name after the ‘new’ name of Finkle Street came into common use. Unfortunately the archived documents regarding Finkle Street, from the middle of the 14th Century onwards, are dense and wordy, mostly in the form of deeds and rentals. The information readily discernable from them suggests that few plots actually had buildings on them, and that the land remained empty for decades except for a few smaller properties and gardens.

The available details of property transactions for this area begin in the 1360s, with the name Finkle first appearing circa 1408 (variously as Fynkell, Finkell, Fenkill etc.). No actual houses are mentioned in the street until the middle of the century, as earlier references to ‘tenements’ may just have related to land, and ‘messuages’ (dwelling houses) first appear circa 1368. The various rent and tax returns show there were very few properties or inhabitants in the street until the early 15th Century, but by the 1470s there were properties with gardens. These may be those shown on Wenceslaus Hollar’s plan of Hull, made in 1640 (see above), which shows only three or four buildings in Finkle Street. On the plan, Finkle Street is shown as ‘Finkell Streete’, and the only buildings shown are corner buildings that appear to front on to other streets. However, a later historian James Sheahan noted ‘in 1649 there was a mill in Finkle Street, and the street then chiefly consisted of gardens’.

The street seems to have had its main period of growth in the late 1600s and early 1700s, consistent with the mercantile and trading success of the town and the need to build on every available piece of land as the old walled town reached saturation point. 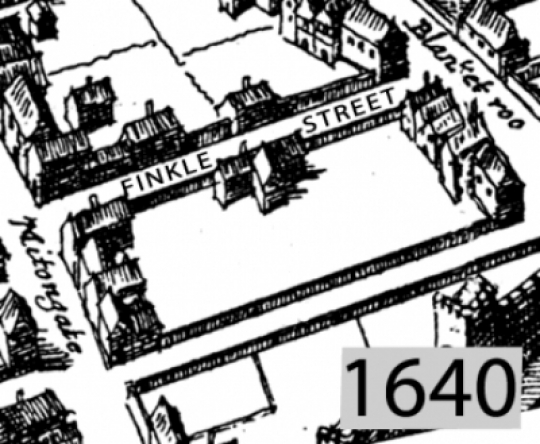 By the 18th Century the street had several pubs (although probably established much earlier) and a theatre or playhouse, built in 1768 - paid for by subscription. The playhouse stood on a plot of land formerly occupied by Habbershaw’s or Abishar’s Yard and replaced the earlier ‘New Theatre’ in Lowgate. It was managed by Tate Wilkinson, as was the Lowgate theatre, and visited by many leading actors including Munden, Knight and the elder Mathews, and following the granting of a royal patent in 1769 it became the Theatre Royal. Although successful, the theatre soon became too small for its growing audience and difficulties arose due to Finkle Street being so narrow. Mr Wilkinson built a larger theatre in Humber Street in 1810 and the old Finkle Street theatre fell into disuse. Robert Thew’s plan of Hull made in 1784, shows the theatre at the south-east side of the street - the only building of note in the street, and no gardens were shown at that date.

The first major trade directory for Hull of 1791 lists a varied mixture of inhabitants in Finkle Street including brewers Akam & Brooks, a ladies board school run by Charlotte Bayldon, Robert Belt – a tailor of course, William Blakely at the Theatre Coffee House – one of three pubs in the small street at that date, Gover & Co merchants, Thomas King a worsted maker, as well as corn factors, master mariners, surgeons, bricklayers, pawnbrokers, joiners, pipe makers and wheelwrights amongst others.

The first large scale Ordnance Survey plan surveyed in 1852 (see above) shows at least eight small courts entered from the street including Guardian’s Place, Theatre Court, Finkle Court, Albany Square and George’s Place. These many small courts were a criminal’s paradise, as most also had secondary exits into surrounding streets such as Mytongate, Sewer Lane and Blanket Row. Theatre Court, named as it originally faced the Theatre Royal, was a typical example of the courts in Finkle Street and the old town. Formed in a dogleg it was entered via a passage next to no.20 Finkle Street, opening into a slightly wider court with houses on each side. There were at least 22 tiny dwellings within the court, beyond which more passages led on to either Mytongate or Sewer Lane. Theatre Court was almost certainly developed in the middle of the 18th Century, possibly by Charles Mountain, and was re-named Providence Place circa 1870; the census of 1871 listed over 90 inhabitants in the 21 occupied properties. Providence Place is shown below right, looking east towards its Finkle Street entrance.

The next census in 1881 recorded that six of the 22 houses were unoccupied on the night of the census, but even so - the remaining 18 houses, simple one-up and one-down dwellings, housed 70 people that night alone. Heaven knows how many others lived there unofficially. Later photographs made by the corporation Health Department in a report on its condition, give a vivid impression of the lives the occupants must have had. The dark, damp, shadowy atmosphere, hardly ever lit by the sun, must surely have affected the physical and mental health of those who were unfortunate enough to have lived there. Plans show the one-up, one-down houses were on average just 12 feet square, and very few communal privies were provided to serve them. 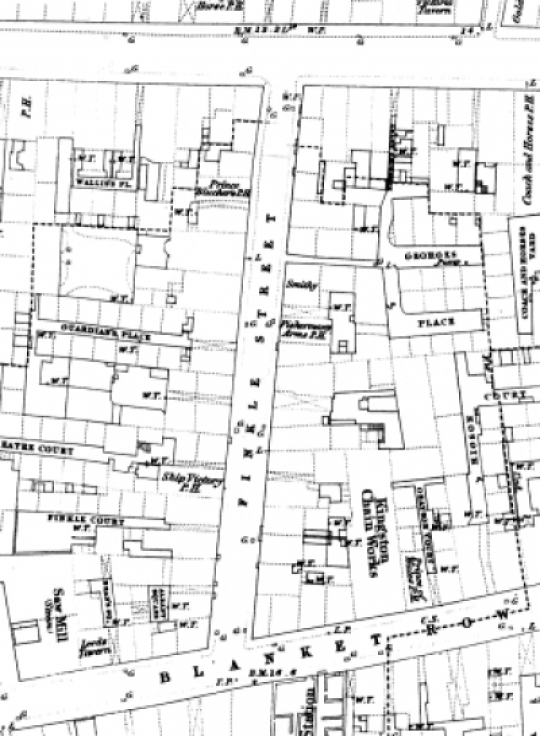 Building plans for Hull are not generally available until the 1850s, and Finkle Street plans are few, suggesting that the street was fully built up by then, and only a few new buildings were built after 1850; deeds are available for many properties from as early as 1614, but most are from circa 1700. Later plans show many houses and courts were bought and demolished for the construction of warehouses, as the street developed - the street had always been home to many businesses, mostly ran from the owner’s homes, which doubled as business premises. In Finkle Street, as in most streets within Hull and other towns throughout England, many small businesses supplemented their income by selling ale; Finkle Street’s several pubs developed from these small ale-houses recorded from the middle of the 18th Century.

No photograph of this old beerhouse is available as it was demolished in 1872/3 for the construction of Mr Lofthouse’s new warehouse. These are some of the known victuallers at the pub: -

Fishermans / Painters / Blacksmiths Arms, at no.7 and/or no.8

These references may link with the Leeds Arms or the Fishermans Arms: -

The two long-standing, and easier to track, pubs that survived the demolition for the new warehouses in 1872/3 were: - 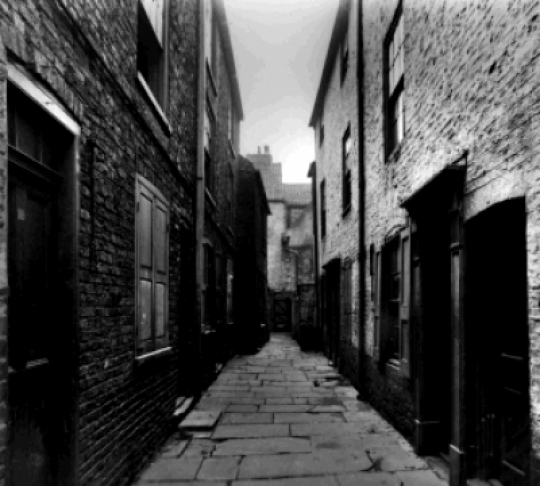 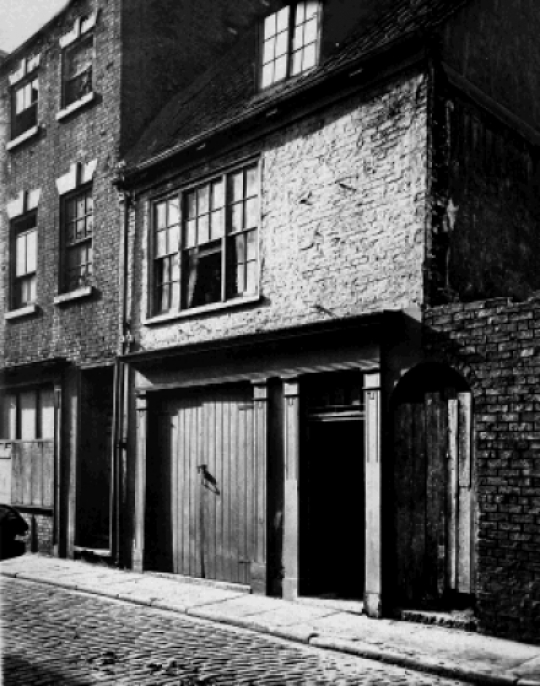 No.27a, latterly part of the pub, was found unfit for human habitation in 1938 and ‘four persons of the working classes were evicted’. Plans and notes made at that time reveal that the ground floor rooms were only 6’6’’ high (THC/1218), and another Health Department image, dated 27.10.1938, shows the squalid condition. The photograph shown above right is from 1904, showing the pub just after closure. 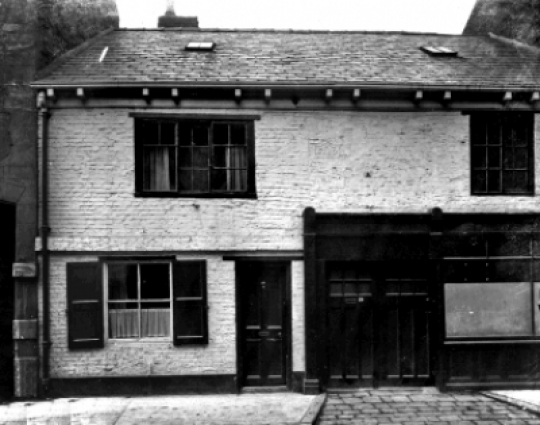 Victoria County History of the County of York, East Riding, Volume 1 The City of Kingston upon Hull. Edited by K J Allison. Oxford University Press for Institute of Historical Research 1969.

The Changing Plan of Hull 1290-1650: A guide to documentary sources for the early topography of Hull. Rosemary Horrox. Kingston upon Hull City Council 1978.

City & County of Kingston upon Hull. Calendar of the Ancient Deeds, Letters, Miscellaneous Old Documents, etc. in the Archives of the Corporation. Indexed by L M Stanwell, Guildhall Hull 1951.

A History of the Town & Port of Kingston upon Hull. James Joseph John Green, Beverley 1866.Sheahan, 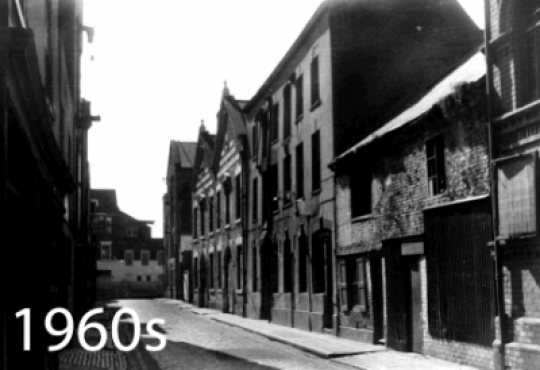 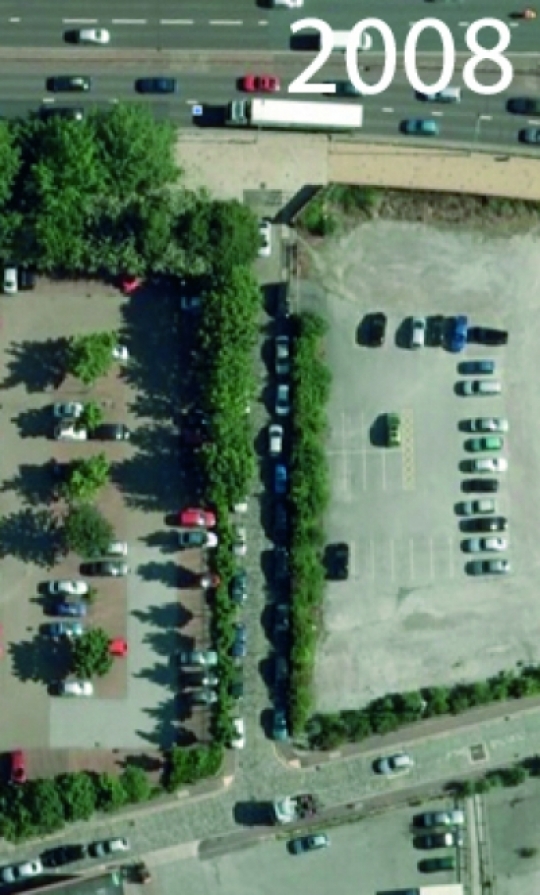