This page is a dedication to my great friend and mentor Chris Ketchell, who passed away suddenly in the early hours of 31 January 2011. This first section is an obituary that I wrote for the Yorkshire Post, which appeared in a shortened form on 5 February. I will add to the pages when time allows, and would welcome any memories or photographs that any of you would like to have put on this page.

On the right, Chris swiftly exits a passage in the Old Town, closely followed by myself - he used to say that its amazing how many doors and gates opened if you leant on them hard enough. Equally amazing was the size of items you could rescue from old buildings, when your only transport was a push-bike. Well done Chris. Below that is a colour photograph made by Sue Coupland showing Chris with Marion Toffollo at the 1992 East Yorkshire Family History Conference; behind him is a dsiplay promoting the Lost Churches & Chapels of Hull book, which Chris helped to produce. The last picture is another of mine when were out recording Hull's dissapearing public toilets (see toilets page).

The East Yorkshire Local History Society have published photographs of Chris and his followers on their site, made by Chris Meade. They can be viewed by following this link: - 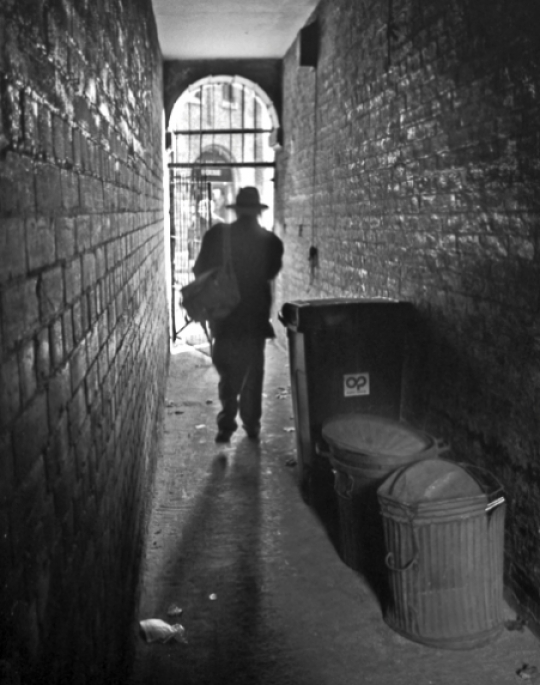 Born in Heckmondwike in the West Riding on 25 April 1944, Chris Ketchell and his family moved to Driffield in 1949 when he was just five, and his sister Susan was two. Chris’s father was the cemetery superintendant, and they lived at the cemetery lodge. Educated at Bridlington School from 1955, he stayed on into the Sixth Form for just one term and left school aged 16 at Christmas 1960.

Commuting to work in Hull by train from Driffield, in the new year of 1961, his first job was at Sowerby & Rushowrth accountants at no.3 Parliament Street. He later worked for Oughtred & Harrison on the Beverley Road. In 1968 he moved permanently to his adopted City of Hull, and having found his office jobs unfulfilling – and suffering ill health, developed an interest in conservation during the 1970s. At this time Chris was unemployed for long periods.

It was also in 1968 that Chris married his first wife Susan, and they lived in Grove Street, off Beverley Road, moving to Pearson Avenue in 1970. Chris lived at various addresses in the Beverley Road and Prince’s Avenue area, before settling in the Avenues’, where he spent the majority of his time in Hull. Now a local publican and brewer, Alex Craig shared his home for many years, and the two became huge supporters of the Campaign for Real Ale (CAMRA). Chris and Alex also formed the Get Stuffed Party – and had at least one candidate in an election, their HQ being their Prince’s Avenue flat. Through his love of music and the arts, Chris began attending the newly formed Hull Arts Centre in 1970, where in his own words he:

‘… went to everything in its early days – including drama, poetry, talks and no doubt music, which eventually, through attendance at the WEA [Worker’s Education Association] lunchtime discussion meetings at the Hull Arts Centre, led to local history…’

It was also whilst attending the WEA groups, that Chris met his own mentor – Mr William Foot-Walker, later securing a part-time position at the Museum of Army Transport in Beverley, where he helped establish their archives. There he met another friend who had a major influence upon him – Leslie Powell. Chris began studying for the Certificate in Regional & Local History at Hull University’s department of adult education, and his interest in local history was rapidly developing. He was never to complete the Regional & Local History certificate - but whilst at Beverley, Chris saw an advertisement in the Humberside County Council’s ‘Vacancies Bulletin’, for a post within a new local history project.

Chris applied for the job, which turned out to be supervisor of the Humberside College of Higher Education’s Local History Archives Unit. It was here Dr Eric Sigsworth took a shine to Chris, and employed him ‘on the spot’ in 1985, although the post had run since 1984 under the first supervisor Helen Buckle. Chris was never a lecturer, and only ever a member of the clerical staff, but it was largely through Chris’s dedication and vision, that the unit became a nationally recognised institution, and he became a largely self-taught authority on local history.

Funded by the Manpower Services Commission, the unit was also one of very few that continued after the funding ran out. Chris was probably instrumental in establishing more local history societies than anyone else in the area, and chaired many – not least the East Yorkshire Local History Society.

It was at the History Unit’s new home (from 1989) in Park Street that I first met Chris, when seeking out photographs to bring my family history to life, following the death of my parents in the 1980s. It was the early 1990s, and to me history was just another subject at school – ‘1066 and all that’. ‘Local history’ was a totally new concept. Chris gave me so much more than I expected, and I was privileged to develop a friendship with him that encompassed not just local history, but social history, collecting old photographs, music, and of course – our other passion – old pubs and real ale. 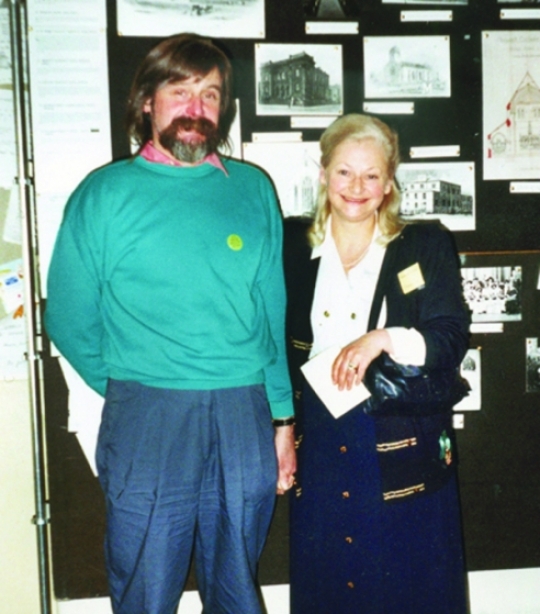 It’s difficult to put across in so few words what a truly encyclopaedic knowledge of local history Chris had. His enthusiasm for the subject drew people in, often people with little or no academic qualifications such as myself, or those who were daunted by the thought of studying at formal institutions. All were encouraged to carry out small pieces of research, and nurtured by the supportive, and informal atmosphere of his classes, in many instances their research developed into in-depth studies, of significant local and national importance.

Particularly important was the way in which Chris encouraged people to record their own lives, either in photographs, or in written or recorded personal reminiscences. By giving ordinary people a voice, he created an important record of lost trades, lives, and whole neighbourhoods – and all long before it was fashionable to do so. His personal collection of slides and photographs will provide a unique archive of very recent history – literally that which happened yesterday – often neglected by modern historians. When asked to list his hobbies, he would frequently mention: ‘cycling around photographing things’. He was often to be seen cycling around photographing street signs, new shops, supermarkets and the ephemeral fragments of everyday life that would otherwise be forgotten. On the right is Chris photographing things, on one of our trips around Hull - happy days indeed.

Equally important, was Chris’s devotion to architectural heritage, and he was keen to encourage people to be more aware of the heritage that surrounds them. He used to call it ‘history on the ground’, and in his work with the ‘Help! Conservation Action Group’ in the 1980s, he was instrumental in bringing architecturally important buildings to the attention of the authorities, in an attempt to prevent their loss.

His classes, legendary local walks, talks and slide-shows, and the material he published in several hundred booklets through the former Local History Unit at Hull College, have been the catalysts for many people to share their own research, whilst meeting what often became life-long friends. Through his ‘The Local’ magazine, he provided a forum for local societies to advertise their events, promoting talks, new publications, and all things local; he was also the author and co-author of several books. The Local History Unit finally closed in 2006, and Chris was made redundant – too disheartened to accept a new position that was offered to him.

Twice married – it was through his second wife Anne, that Chris began attending Quaker meetings during his later years, Chris had been divorced some time, before entering the residential home where he passed away so suddenly.

I owe Chris a huge personal debt of gratitude. Had I not met him, and another local historian Graham Wilkinson – also sadly no longer with us – I would never have been inspired, or gained the confidence and knowledge to write my own books.

So much can be said about Chris’s contribution to the study of Hull’s history, but so sudden was his passing, that it will take time to fully appreciate his legacy. It is my firm belief that there has never been, nor probably ever will be again, one single man who has done so much to promote – and inspire others to promote – the history of the often maligned, yet still great, City of Hull. 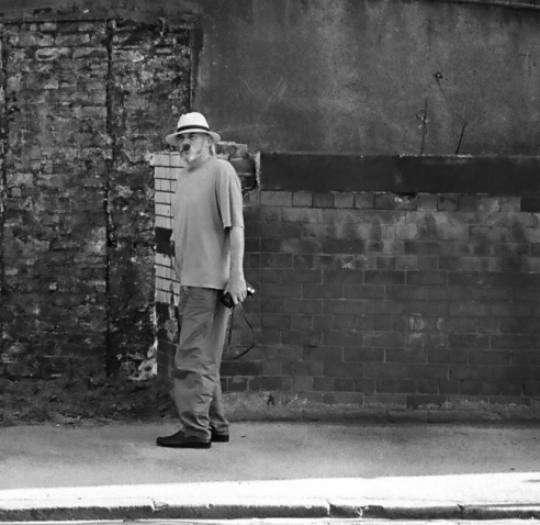