The refreshment rooms of Beverley’s Railway Station appear to have had a licensed bar since soon after it opened, circa 1846 and the premises were listed simply as the Station in some directories.

The Refreshment Rooms at the station were listed as new in a trade directory of 1858 but had been recorded since 1855 at least and were clearly shown on the Ordnance Survey plan of 1852/3. The rooms are now lost within the modernised station building but were originally situated to the right of the main entrance hall. The former rooms are now occupied by the excellent “Ceruttis 2” restaurant who maintain the buildings in good order.

The Railway Tavern was a small beer-house that opened circa 1846, the same year as the newly constructed Railway Street was opened to the public. Although the Railway Tavern continued to be listed in the trade directories until 1922 it was made redundant in 1918 when £1400 compensation was paid to the owners T. Linsley & Co of Hull.

The tavern closed in December 1921 and was soon demolished for the widening of Eastgate corner, which had become too narrow for modern traffic; Nos.11 and 12 Wednesday Market were not listed after 1925 in the trade directories and No.10 was altered in 1924 (BOBE/6, 1924). Looking at the site today it would seem almost impossible to have fitted a pub in the small space that is left. A photograph of c.1913 (see right) shows it to have been a plain building, probably 17th Century, with gable-end to the market place. It had a typical beer-shop window frontage to Wednesday Market and a side door in Eastgate.

The photograph shows that it was also a T Linsley & Co house, and sold Worthington’s Ales under licence. The link below opens a map of the area showing the location of the Railway Tavern and other pubs in the market area. 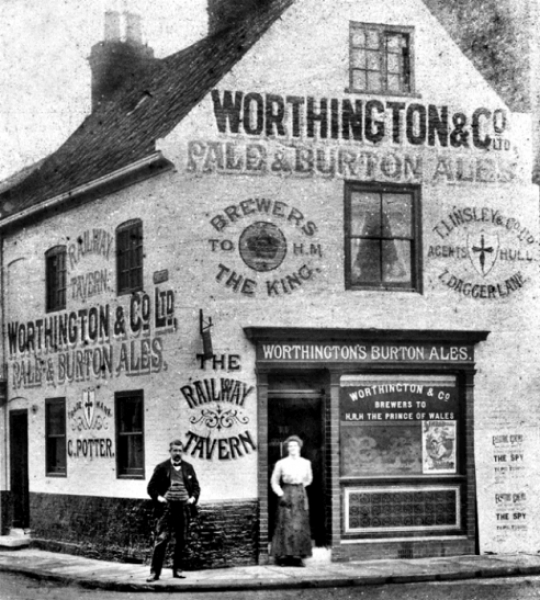 The Reindeer was a beer-house on the north side of Wilbert Lane latterly numbered No.29.

It was not shown on Wood’s plan of Beverley in 1828 but appears to be listed in the trade directories from around 1830, initially simply referred to as the sign of the Board. It may possibly have been purpose-built as a pub and was probably opened under the so-called “Beer House Act” of 1830.

Early in 1876 alterations took place for owners Hodgson & Gibson when a new “shop window” was added with “red pilasters to each side” (BOBE/6, 1875-64). In 1881 the Census listed Edmond Boddy as a publican aged 38, and his wife Ann present at the pub.

The Reindeer held a beer-house licence until December 1909 when it closed following redundancy. £782 was paid in compensation to the owners William Glossop & Bulay Ltd upon its closure. Reindeer Yard (named with or after the pub) was adjacent to the property and survived until re-development of the area in the 1950s. The map shown here is re-drawn from an Ordnance Survey plan and shows the location of the pub in relation to the street and other buildings. 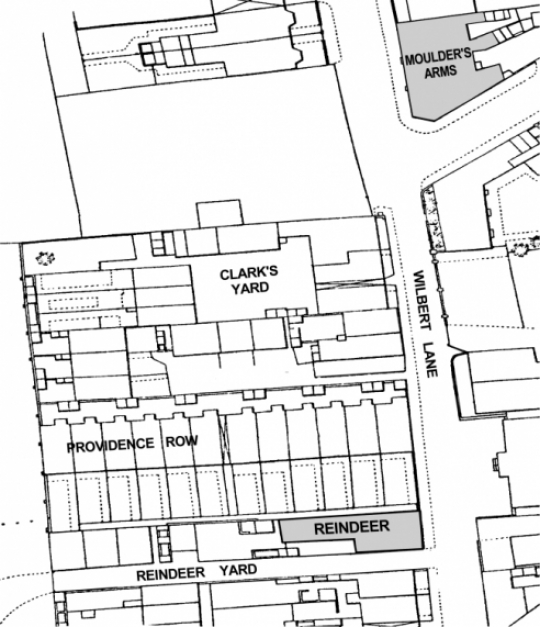 A feoffment dated 2nd March 1574 recorded the transfer of property “in the occupation of Edward Thriske, cooper” on the site of the present Rose & Crown. It recorded the transfer from “Robert Fayrer, saddler to Stephen Smailes, tailor and wife Margaret: tenement called the Bull, and a garden and adjacent close lying without the north barres”. It described the land as bounded by North Barres to the east, a field (solum) called the Horse garden to the west and private property to the north and south.

Although the Rose & Crown was recorded in as the Crown & Anchor on J Wood’s plan of 1828 the property had been known as the Rose & Crown since at least 1800. The large amount of rooms and the stabling attached to the inn were often used for the accommodation of racehorses and their owners whilst at the Beverley Races and hunters out on the West Woods and many horses and pony sales took place in its yards. The following advertisement appeared in the Hull Rockingham 28th January 1815: -

“CAPITAL INN, at BEVERLEY. To be SOLD or LET, - All that Capital, Old-established, and Well-accustomed INN, at Beverley, in the county of York, called the Rose & Crown, now occupied by Mr. John Skelton.

This is one of the principal Inns in Beverley, and is not only eligibly situated for Business in general, but particularly for the Quarter Sessions, Races, and Fairs, at which public times it does the principal Business. The greatest part of the House, Stables, and Buildings are new built, and the whole premises are in excellent Repair, and in every respect convenient and adapted for an Inn.

Immediate possession may be had, and the person who buys or takes the Inn, will be required to purchase the FURNITURE, STOCK of LIQUORS, BREWING VESSELS, &c at a fair valuation. Further particulars may be had on application to Mr. Robt. Skelton, of Newstead Grange, near Malton; to Mr. Joseph Hall, of Beverley; or Mr. Samuel Bland, of Beverley; or to Messrs. Hall & Cambell, Solicitors, Beverley, Dec. 28, 1814.” 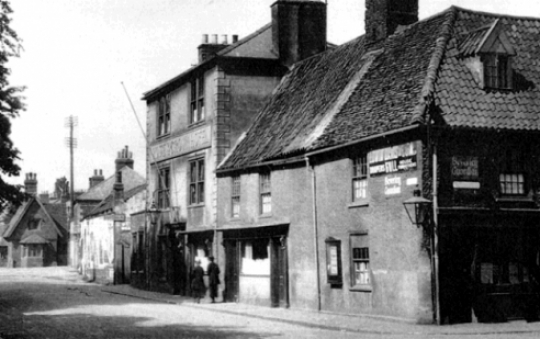 Later in the Census of 1851 James Skelton aged 70, his wife, one daughter, one son, two female house servants, one male outdoor servant and a single guest were recorded at the inn, which was again for sale in the Hull Advertiser of 25th February 1853. The following notice appeared in the Beverley Guardian in December 1861: -

“TO BE SOLD BY PRIVATE CONTRACT, - all that extensive and well-accustomed INN, “The ROSE AND CROWN.” situate without North Bar, BEVERLEY, near to the East Riding Sessions House, and adjoining the BEVERLEY WESTWOOD. Having Stabling and Loose Boxes for upwards of Eighty Horses, suitable for Race Horses, Hunters, &c.; Coach Houses, Sheds, Stack and Fold Yards, and a superior domestic Garden, well situated for Building purposes. The Property is Freehold, the situation excellent, and presents a very favorable opportunity for conducting a large and profitable business. For further particulars apply to Mr. ROBERT SKELTON, No.6, St. Mary’s Terrace”.

The Rose & Crown’s original address was York Road but it was drastically altered and re-fronted in 1931 to how we see it today for Darley & Co, facing North Bar Without; the plans (BOBE/6, 1930-30) noted ‘New front etc. for Rose & Crown, York Road’. The plans for the redesign of the pub were approved in the winter of 1930 and in their letters to the Beverley Corporation the architects stated “as you will see from the plans we are pulling down the front and rear [east and west] portion of the premises and altering the centre portion. The heights of the floors etc. remain as at present.” The work was completed in June/July 1931. Because of its stylish design it has become another of Beverley’s Grade II listed pub buildings although its listed building description appears to suggest it is older than it actually is. The photograph above shows the original pub beyond the corner buildings and dates from c.1920.

The Rose & Crown’s sign was described by The Rambler, writing in 1939 as “Royal in character, first used in the time of Henry the Eighth. The White Rose of York, we observe, is surmounted by the Crown of England. It has been painted with artistic taste. At the end, hung on ironwork, is a luxurious bunch of grapes; the emblem denoting excellent wine is here sold”. This article describes an inn-sign that was then probably only a few years old. A postcard view of the Rose & Crown of circa 1931 shows it had no signboard at that date and earlier (circa 1900) photograph shows it had none at that time also. 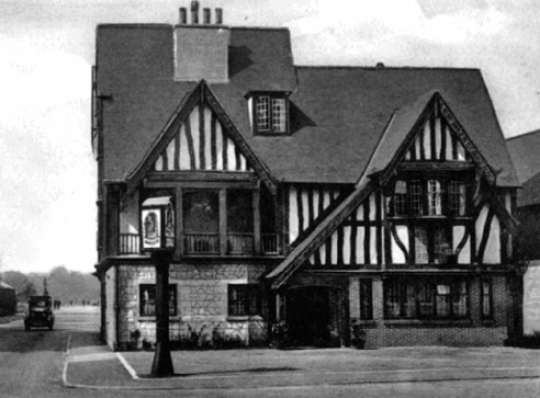 The Royal Oak is a former beer-house that was at one time known colloquially as the “Drum & Monkey” for various obscure reasons. Possibly after the lane, which runs to its north (now called Grosvenor Place) that was allegedly known as Drum and Monkey Lane in the 1800s as the drummer from the band of the old Picture Playhouse lived there (David Sherwood recollection). The official name of the Royal Oak may have been a reference to the nearby Westwood however the “Royal Oak Lodge” of the Oddfellows friendly society was formed in 1867 and there may have been a connection. The Census of 1881 listed Aaron Sheperdson as a beer-house keeper and night watchman aged 66, at the pub with his two sons and a boarder.

The property underwent minor alterations in 1901 (BOBE/6, 1901-26) but retains much of its character and charm.

This pub was recorded by name only once in 1831 but there were several beer retailers in North Bar Without that as yet I haven’t found a home for, and it is likely the alehouse had been open some years prior to 1831 (see Strays). It is highly likely that North Bar Without would have had a number of alehouses as horse and other fairs had been held there for centuries.

This may have been its first official listing after the beer-house act of 1830, which required licensing for the smaller houses. It ceased to be listed after 1840 and by 1864 the current Royal Oak in Cartwright Lane was open for business.

North Bar Within. Also known as the Boot and the Turf Inn.

The Census of 1851 recorded William Cooms (sic) aged 66, his wife and a daughter at a small small beer-house then known as the Boot, but by 1858 the name had changed to the Turf Inn, and was recorded as new in a trade directory of that year. The location of the pub, directly next door to the larger King’s Arms, probably meant that it was frequented by the working classes, whilst the more well-to-do visited its larger neighbour. Its earlier names suggest it may have been a place where you could have a wager on the races.

When David Steels took over in the 1870s it appears that he changed the name to the Royal Standard and in 1875 the Royal Standard lodge of the Independent Order of British Workmen was formed. This was a friendly society that may have met at the pub and may consequently have been a reason for the re-naming.

It was also in this year that a new “Dram Shop window” was added, the exterior details of which survive today (BOBE/6/,1875-65) although with a modern window glass. The property is a Grade II listed building and the description given by the Department of The Environment in 1969 suggested that the building is possibly of the 17th Century and timber-framed, having been re-fronted in the 18th Century (DoE serial No.9/234/69) - the enlarged section of a photograph shown here dates from c.1905 and shows the re-fronted building with its rendered frontage. David Neave writing in the revised Pevsner also suggests that some of the properties on this row were re-fronted in their 1730s and the listed building descriptions note that Nos. 32-36 were refronted in 1736 by carpenter & joiner Peter Duke. It is almost certain that the front of this unassuming pub hides a timber-framed building of the 17th Century. Due to its compact size it has limited scope for alteration and has managed to retain one of the more traditional front rooms (the former dram shop) of all of Beverley’s pubs, which actually has the feel of a real pub and is worth a visit. It was given its present black & white frontage in the early 20th Century.

Coombs Yard still runs to the south of the block and its name refers the well known former victualler of the pub during the 19th Century. The link below opens a map showing the location of the pub and associated buildings c.1890. 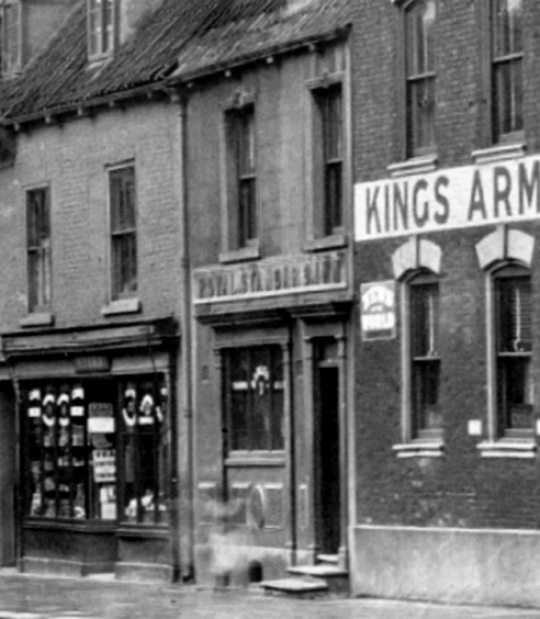