The Eager Beaver was originally called the Scottish Soldier and was built within the Model Farm Estate in 1966, taking its licence from the closed Blue Bell in Wood Lane. Its plain lines and box structure now present a fair example of pub architecture at that time and it was renamed the Eager Beaver circa 1986.

The road from Beverley to Hull was one of the first to be turnpiked by the turnpike trustees in 1744, and the turnpike road began at “the Golden Fleece Inn in Beckside” (VCH page 168). The inn was mentioned again in the Beverley Corporation Minute Books of 21st April 1755 when “the road from the Golden Fleece to the crane [is] to be levelled for paving, and two keel loads of sea gravel to be sent for the purpose”.

The inn itself had probably stood for many years prior to this, as its name was an allusion to the woollen industry, which had been an important industry in Beverley during the Middle Ages.

By the time of the 1881 Census only the innkeeper, 43 years old Elizabeth Marson was resident at the inn with one boarder. The beck had seen its heyday come and go and there were many other pubs in the area to serve the trade and although the Fleece Inn held a full licence, it was made redundant in 1906 when £500 was paid in compensation to the owner Robert Ranby Stephenson.

One of the roadside walls of the Fleece still survives in part and some of the old window openings etc. of the pub can be seen at the rear [or they could in 2000]. The obvious age of the brickwork still visible, and the ancient name of the inn, confirm that it was probably one of Beverley’s oldest. It is a great shame the building no longer exists and sadly I have as yet failed to discover an image of the former pub. A location map based on the 1850s Ordnance Survey plan can be seen by clicking the link below.

A deed held in the Hull University Archives, dated 28th February 1792, mentions a “lease for a year –Elizabeth Oxtoby & James Edmond to Richard Judson- messuage now used as a public house, four adjoining tenements and a large garth on north side of Beverley Beck” (DDMC/9/107). This may suggest that the messuage (a term used in deed to signify a dwelling house and the surrounding property) had then only recently opened as a pub, which ties in with the pubs first mention in the Poll Book in 1784. John Dove a later victualler of the pub, was also a brewer of the Ladygate Brewery circa 1817-1834.

A possible reason for the first name of the pub the Cock & Bottle, was that it held cockfights, a very popular sport until finally being prohibited by law in 1849. Coincidentally, it was around that date the Cock & Bottle changed its name to the Foresters Arms. Beverley’s various lodges of the Foresters Friendly Society were founded between 1839 and 1844 and may well have met here, thus accounting for the new name.

The Census of 1851 recorded Thomas Scarr aged 43, his wife, one step-son, two daughters and four sons at the Foresters Arms. The original location of The Foresters Arms cabn be seen by clicking the link below, which is a map based on the 1850s Ordnance Survey plan of the area. The original building is shown in this 1926 photograph.

The pub was altered in May 1900 for owner Robert Stephenson of the Golden Ball Brewery and plans are available in the East Riding archives (BOBE/6, 1900-7) but the current property is a completely rebuilt structure of 1938 in the typical road-house style of the period, and similar to others in Beverley of the same period e.g. the Rose & Crown and the Tiger; again, these plans are also available in the archives (BOBE/6, 1938-27).

Some nice features remain around the doors including an illuminated sign above the entrance lobby and some carved stonework within the mock-Tudor hood-moulds of the door surrounds. Sadly one of the original matching pair of entrances has been bricked up at some point. 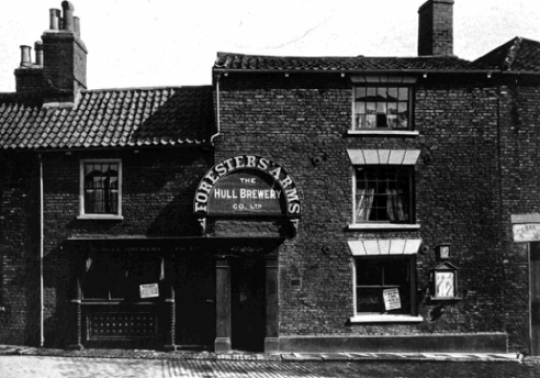 A 17th Century pub token, often referred to as a pub-check, exists with the legend “At the Fox in Beverley” with the initials of the victualler –W S - and those of his wife I or J on the reverse. This small coin may provide some evidence of the age of a pub known as the Fox but provides no evidence to its location. However on 1st April 1734 the Corporation leased a “messuage in the Dings to Robert Burton innholder” (East Riding archives DDBC/16/127). The Beverley Corporation Minute Books record later transactions when on 15th November 1784 the Corporation granted “leave to Robert Burton, surgeon to project a bow window at his house in the Dings late known by the sign of the Fox”, and on 7th December 1772 granted a “licence to Robert Wood butcher, to assign a house in the Dings known as the Sign of the Fox to Thomas Brown Junior butcher for 21 years”.

The last known record of the Fox was on 23rd August 1805 when a “lease and Release for £245 was granted from Thomas Fox of Cottingham, gentleman to Richard Empson junior of Beverley, a glazier… all that messuage and shop formerly used as a public house” (DDCV/15/364 Hull University Archives).

The latter reference to Mr Fox gives a possible origin of the name of the pub, which is now another of the Dings’ lost pub sites and one can only imagine the array of signs and carvings that hung from this short row of property. Is it possible that the Fox was one of the existing properties within the Butter Dings, the Push Inn for example – look for a projecting ‘bow window”.

The property that was once partly occupied by the Freemasons Arms still exists on the east side of Ladygate being Nos.3 to 5 near the corner of Hengate, opposite the old Johnson’s Brewery.

The Census of 1851 recorded Thomas Duffill aged 35, his wife, one daughter and a female house servant all present at the Freemasons Arms on the evening of the Census. Sadly the Hull Advertiser reported in January 1853 – “landlord’s wife robbed and thrown from train” and was accompanied by a colourful article that described Mrs Duffill’s unfortunate experience.

The following advertisement appeared in the Beverley Guardian August 25th 1860: -

“TO LET, the DWELLING-HOUSE and SHOP, situate in Toll Gavel, late in the occupation of Mr. Flower, butcher.

Also, The FREEMASONS ARMS situate in Lady Gate. Immediate Possession will be given, and further particulars may be obtained on application to W.R. LUNDIE.” (sic)

The property that once housed the Freemasons Arms had originally been one four-bay house of the late 17th Century that was divided into two houses later in the 18th Century. A document in the Hull University Archives dated February 1684, records property being leased to Mary Fox of Beverley - a “messuage and maltkiln on the west side of - and two messuages on the east side of - Ladygate”. This may be an early reference to the site of the Freemasons’ Arms (DDCV/15/49). The Freemasons Arms occupied the northern half of the property – nearest St Mary’s (No.3) and was recorded as a pub from circa 1848 until circa 1867. It was shown clearly marked by name on the Ordnance Survey Plan of 1853. A former victualler, Thomas Duffill was recorded as a retired innkeeper in the 1881 Census at No.1 Duffill’s Yard, Eastgate.

After a chequered life the building was saved from ruin in the late 1970s and restored to its former single-property status. It is difficult to picture the property as a pub but it may have had some relation to the brewery complex that was to its immediate south and also directly opposite. The building is a Grade II Star listed property in which it is described as of the “late 17th Century” with the front being “of the late 18th Century” (DoE serial No.9/126/50). A postcard image of the property from circa 1905 shows the building still with its two doorways and the brewery's maltings buildings attached (shown above) and the link below shows the group of pubs at this north end of Ladygate, based on an Ordnance Survey map from the 1850s. 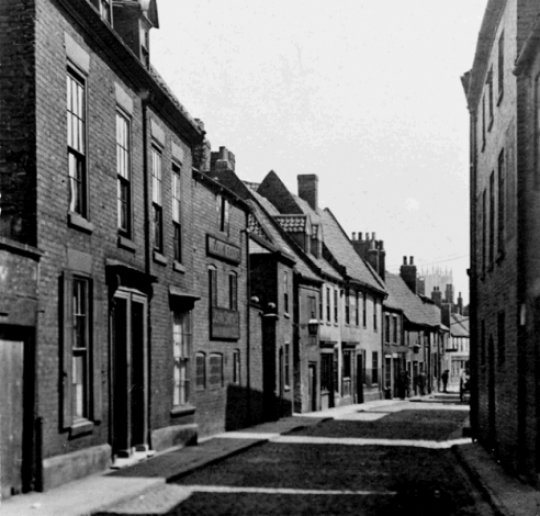 The only records available for this long-lost pub are a collection of deeds in the East Riding of Yorkshire Council Archives and in the Hull University Archives, amongst which are the following references: -

21st September 1807 - “Robert Smith carpenter of Beverley granted a lease of the ‘French Horn’ in Londoners Street [an early name for Highgate] for six years at £322 p.a. plus 8% on money laid out in repairs of stables and outbuildings”.

2nd May 1808 - Thomas Arnott, innkeeper leased “the French Horn on the west side of Londoner Street”.

3rd February 1823 - “The former building known as the French Horn Inn was leased to Robert Arnott for 10 years from Old Lady Day 1823 for a rent of £12 p.a. on condition that he “repair the same premises in a substantial and workmanlike manner” within two years and leave it in the same good state of repair at the end of the lease. 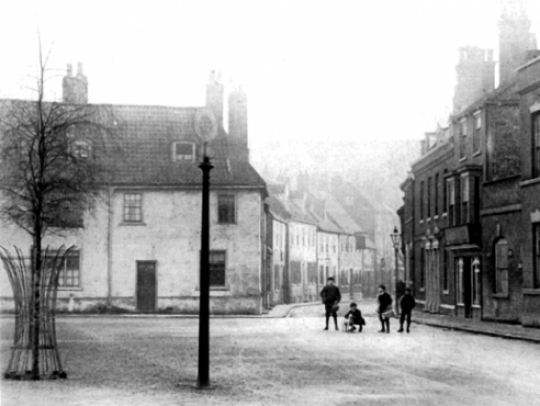 The French Horn is thought by several local historians to have been the present café at the north-east corner of Highgate - the south side of Wednesday Market. However, the reference from 1808 above listed it clearly as being on the west side of Highgate.

In earlier documentation repairs were required of the owner to stables and outbuildings and a garth or garden and a court were mentioned. It is difficult to see how all of the buildings and gardens would have fitted into the rear of the present café property. To the west however, the property fitted the description well, with cart access and gardens. A reference in the trade directory of 1791, which lists it in Wednesday Market would seem to suggest that it was at the very north end of Highgate. The north end of Highgate can be seen in this 1905 photograph, including the possible location of The French Horn on the left.

There is still room for debate on its location however, as John Wood’s plan of Beverley made in 1828 showed gardens to the rear of the properties on both sides of Highgate. There was also a Talbot Inn in Highgate during the 17th Century according to the Victoria County History, the location of which is unknown, but it is possible that the French Horn may have been the same property. If it was the corner café site, then beneath its aged exterior is an even older core of pre – 1690 according to the Royal Commission on Historical Monuments survey.

A single reference in the 1861 Census suggests there was a beer-house known as the French Horn and also possibly known as The Greyhound according to The Rambler, at the northern corner of Ladygate and Dog & Duck Lane, opposite the Dog & Duck Inn. The victualler was Samuel Smelt and the beer-house may only have existed for a short time.

By the Census of 1871 a licensed lodging house was listed on the site, which remained as the Model Lodging House for many years.