The Cottingham Nurseries were established in 1788 according to mid-19th century publicity and advertisements, but it was not until the early 1800s that Lincolnshire lad Abraham Martin (b.1786) was the proprietor, and became well known under his trading name of Martin & Son.

Nurseryman, gardener and florist Abraham Martin married Sarah and they had a young family by the late 1820s. The 1841 census recorded 55 years old Samuel, wife Sarah, sons Samuel Elliot (15), Frederick (14), Alfred (8), and daughter Rebecca (12) at their home in Northgate (just east of the Cross Keys pub), all of the children having been born in Cottingham.

His family business continued very successfully in Cottingham and c.1850 Abraham set up additional new business premises in Hull and Brigg, North Lincolnshire. The 1851 census records Abraham, with just Rebecca and Alfred, present on the evening of the census at their new house in ‘Paragon Station Terrace’ in Hull that year. A trade directory of 1851 was the first to mention the business in Hull, at the retail shop just a few hundred yards from home: 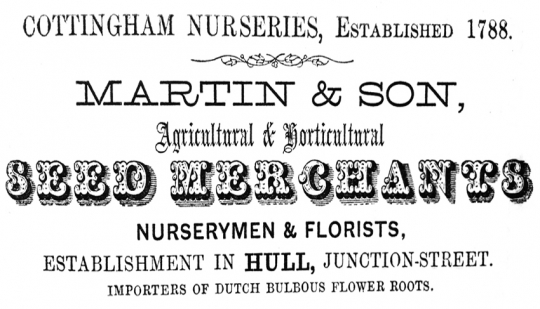 An advertisement featured in an 1855 trade directory, one of the first to mention Martin & Son in Hull

Around 1859-60 Martin & Son acquired land for a new nursery (market garden) at the very north-west end of Spring Bank, opposite the gates to the General Cemetery. The plot stretched north along the edge of Newland Tofts Lane, which formed its western boundary, and was entered via a footpath from Spring Bank. The plot was bounded on the east side by the railway lines of the York & North Midland Railway Co; the railway had been here since 1852, although the well-known Botanic Station (originally named Cemetery Gates) was not built until 1864.

Martin & Son employed local architect & surveyor James Shields to design and construct two semi-detached houses towards the north of the plot, in conjunction with builder R Grasby. The red-brick houses faced west across a ditch and the mucky dirt track that was Newland Tofts Lane (also known colloguially as Mucky Peg Lane) with an uninterrupted view across the dairy fields of the Newland Tofts and Chanter Lands. Almost opposite to the north was Newland Tofts farm and associated outbuildings, later demolished for the construction of Blenheim Street c.1899, and the Prince’s Avenue Wesleyan Methodist Church built in 1904-05.

Plans in the Hull History Centre (ref OB/995) opposite and below) show two simple houses, symmetrically built, and at that time numbered nos.10 and 12 Newland Tofts Lane. The other buildings in the lane – presumably numbered 2 to 8 - were probably those belonging to the General Cemetery Co across the road, built from 1847-53 and Newland Tofts Farm. 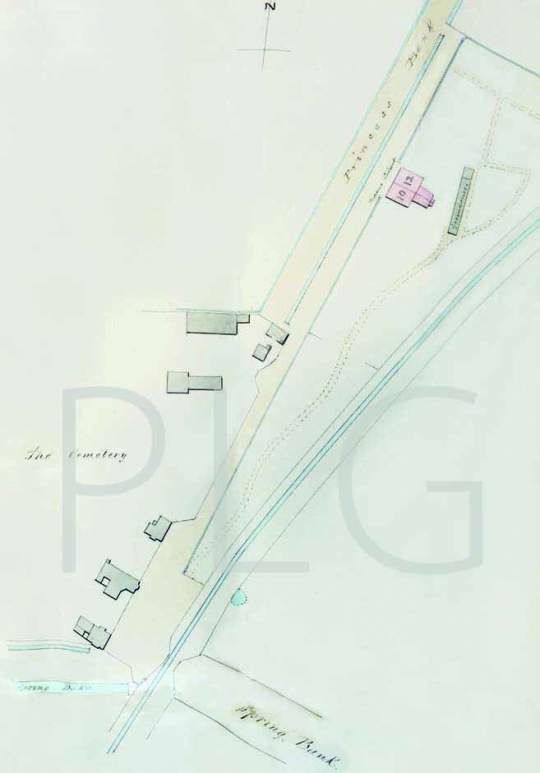 No.12, the northernmost of the two new houses, was named Providence Cottage soon after building (see 1889 OS plan), and this may relate to some of the Martin family’s older (probably rented) property in Northgate Cottingham, which included Providence Place – a court-housing development of eight small dwellings off the main road, accessed via a typical arched alleyway. The site of Providence Place (known locally as Sweeps Square) was immediately east of the Cross Keys pub in Cottingham – now an entrance to the pub car park. Most of the property that the Martins were tenants of is long gone, probably demolished for the Queensway housing development just after the Second World War. A few buildings appear to remain today however – perhaps nos.90 – 92 Northgate, opposite the petrol station.

Abraham Martin was not listed in the 1861 census, and son Alfred was resident at newly built Providence House in Newland Tofts Lane with his mother Sarah (noted as a widow), and one servant girl named Elizabeth Blyth. Alfred was listed as head of the household (aged 29 years) – his occupation noted as nurseryman. The other cottage was rented-out almost from new to provide additional income, and at the time of the 1861 census it was home to a hosier, his wife, son and one servant.

In February 1861 Martin & Son advertised ‘flowers for sale’ in the Hull Packet newspaper, from the ‘Park Nursery, Spring Bank’. Alfred had clearly retained the business name, unless the advert had been placed prior to Abraham’s death. Around this time Alfred’s brother Samuel Elliot Martin joined the company and in 1863 was living at Derringham Terrace, Spring Bank, whilst Edward resided at Providence Cottage with their mother. The city-centre shop remained at no.6 Junction Street – opposite the Dock Offices (now the Maritime Museum), property that was later demolished for the construction of Victoria Square and the City Hall c.1901. 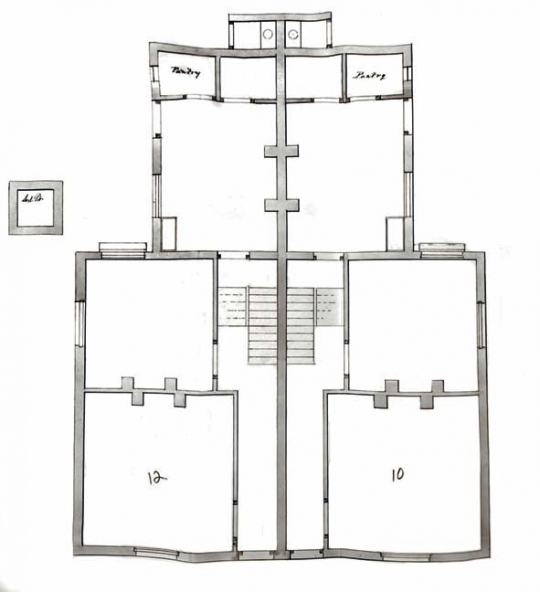 By the time of the 1871 census Alfred was still at Providence Cottage, by that time married to Annie. Also resident were his sister in law, nephew and one servant. By February 1873 the company were advertising ‘new premises in Market Place’ (no.61) in the Hull Advertiser newspaper, and in August 1874 Martin & Son advertised a ‘seven-room house to-let’, at the Park Nursery, Spring Bank, confirming that the other house not used by the family was let to bring in income. The house was still being rented out in 1881 according to that year’s census.

The Park Nursery and the Martin family remained in Prince’s Avenue until June 1887 when the whole of their business premises and other (probably rented) properties in Cottingham and Hull were sold at auction.

The auction papers (Hull History Centre ref. DBHT/9/340) contain a detailed plan of the Cottingham nursery and their houses and shop along Northgate there, plus a brief description of the 'well-known Park Nursery situate close to the Botanic Gardens Railway' in Prince’s Avenue: 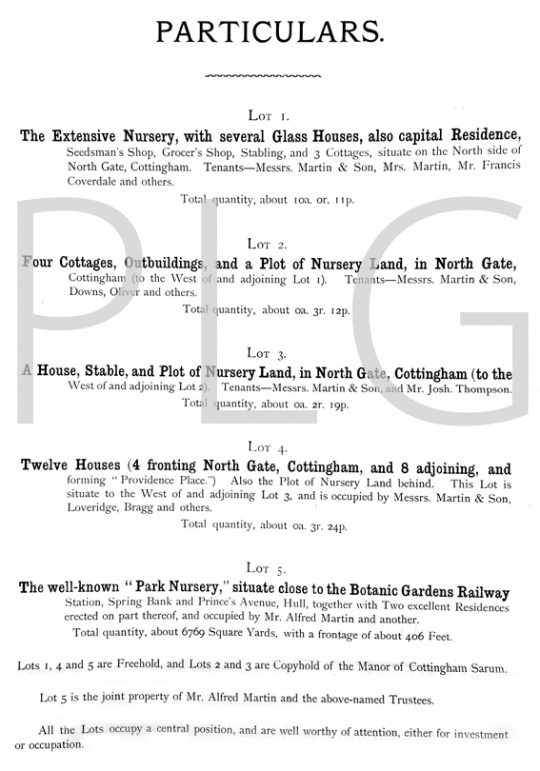 erected on part thereof, and occupied by Mr. Alfred Martin and another.

Alfred continued to be listed at Providence House in the trade directories until 1889 however, and the Park Nursery was still shown on the 1889 Ordnance Survey plan. By the time of the 1891 census Alfred was listed as a retired nurseryman resident in nearby Victoria Avenue (no.107) aged 58 with his wife Annie. Frederick chose to take work as a gardener in Sutton, and later a 1900 trade directory lists him at no.172 Newland Avenue, with his profession noted as ‘gardener to Mr J Rank esq’. 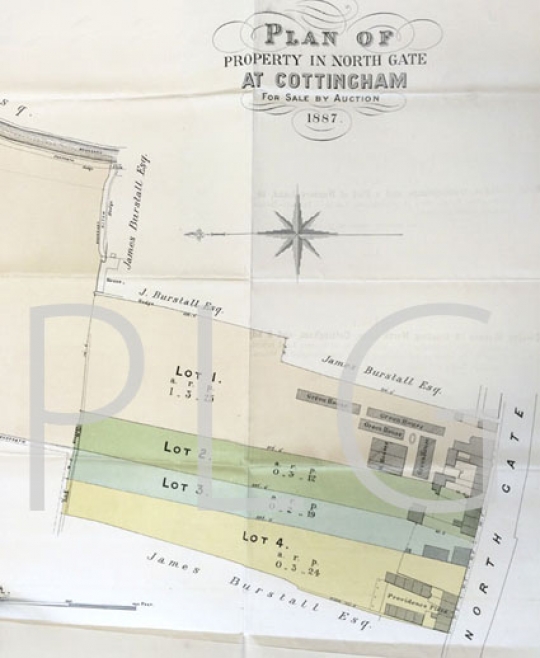 The former houses and the land to the south were presumably bought by the railway c.1889-90, and the land north of the two houses – which stretched as far as the site of the present Fish Street Congregational Church - sold for redevelopment a shops and housing. Bickleigh Villas’ nine shops were built in 1890 according to plans in the Hull History Centre, and added to with one extra shop shortly after. Initially they were numbered 12a (the nursery cottages then being 10 and 12) to 28.

The Martins were no longer listed under Nurserymen, seedsmen & florists at this address from c.1890. Members of the railway staff were resident in the two houses soon after the auction - an 1892 trade directory listed John W. Mason, a station master at Providence House, and Elijah John Giddy, railway inspector resident at the other house (no.10). Both houses continued to be occupied by railway staff until the late 1930s, at which time the houses were still listed as nos.10 and 12 Prince’s Avenue. 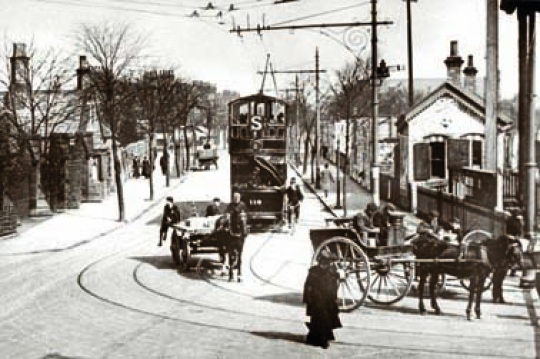 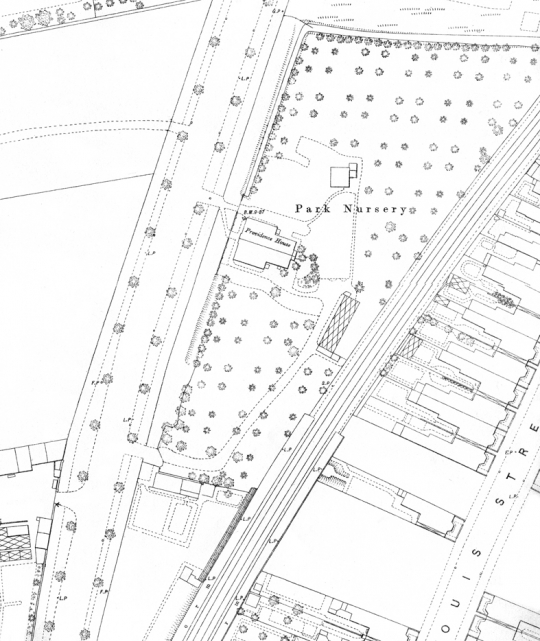 From c.1897 the land between the Botanic Station and the two houses began to be used by coal merchants, the first of which being Mr Strachan in that year. The coal sidings had been in place since c.1891, and It was at that time that the orchards and large greenhouses around the two houses were mostly lost - the end of the nursery. By 1919 at least four different coal merchants were based here, utilising the railway sidings for coal supplies, and the area remained in use as coal yards until the 1980s. An old wooden 'coal hut' survived on Prince’s Avenue until the construction of the Old Zoological pub in 1994, when it was demolished, and a small kiosk type of shop was here too shown opposite - a coal merchant’s shop known as Botanic Coal Supply.

Chris Ketchell recalled that one of the houses, no.8, was briefly a shop in the late 1980s or early 1990s, while the other remained privately occupied. No.10 had been compulsorily purchased by Hull City Council and the other, no.12 was privately rented and still occupied (it was owned by Northumberland & Durham Property Trust). In May 1993 a planning application was submitted for the demolition of the two houses and replacement by two shop units, but it was refused in June 1993. An attempt was made to get the houses ‘listed’ but that was refused in August 1993, following assessment by English Heritage, and from that time the houses were left empty and increasingly derelict. Many internal fittings were stolen. 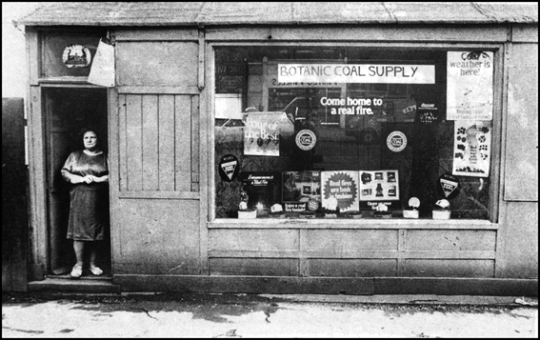 Some help came when in October 1993 the houses were included in the proposed new Prince’s Avenue Conservation Area, however in 1994 planning permission was granted for most of the remaining orchard and gardens behind Bickleigh Villas to be added to the Linnet & Lark’s car-park.

In 1994 tenders invited for the freehold of the houses by Hull City Council and Northumberland & Durham Property Trust ‘with a view to subsequent residential occupation ... following repair’.

However in March 1995 the houses were gutted internally and fires were lit inside them. It was suspected that this was the work of the ‘builders’ to whom the properties had been sold - in theory for refurbishment - by Hull City Council. The wrecking work carried out inside the houses certainly looked like a precursor to demolition reported Chris Ketchell at the time, and staff on site allegedly commented ‘... the boss wants to demolish them and build student houses'. Both Hull Civic Society and Help! Conservation Action Group expressed concern about the two houses to the City Council. Following all of the interest shown in the houses the suspicious activity at the oldest houses on Princes Avenue ceased.

The large site that was occupied by the Park Nursery latterly (late 1990s) comprised of a small remnant of derelict garden and orchard behind nos.8 and 10 (originally 10 and 12) Prince’s Avenue, part of the adjacent petrol filling station forecourt (the eastern wall of the railway station platform can still be seen at the back of the petrol station forecourt), and the terrace of shops originally known as Bickleigh Villas between the two houses and the Linnet & Lark pub. Since then the houses have been occupied fleetingly by small businesses and private tenants, but happily survive intact. 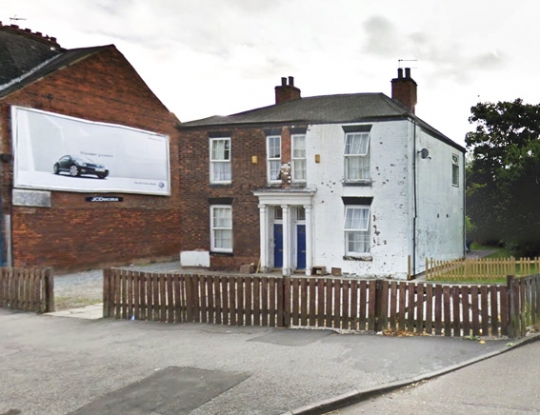 The oldest houses in Prince's Avenue and the Avenue's Conservation area, as seen in 2012

It is very fortunate then that the two houses have survived since the original 1861 development. They are the oldest property on Prince’s Avenue, and the oldest within the whole of the Avenues Conservation area. They were described by English Heritage and the Department of National Heritage in 1993 as ‘... a pair of semi-detached houses, which were constructed in 1861. They look like a pair of Georgian houses ... their extremely late date makes them of local interest ...’ I would suggest its more important than that, and they should be offered more protection.

In the summer of 2014 taxi company ‘65 Cars’ (www.65cars.co.uk) took over both houses and renovated them to a high standard. They were not the first taxi business in Prince’s Avenue however, as Sid and Herbert Field had a taxi office and all-night petrol garage on the site of the present Linnet & Lark pub in the 1920s, which remained in the motor trade until the late 1980s – latterly as a car showroom. 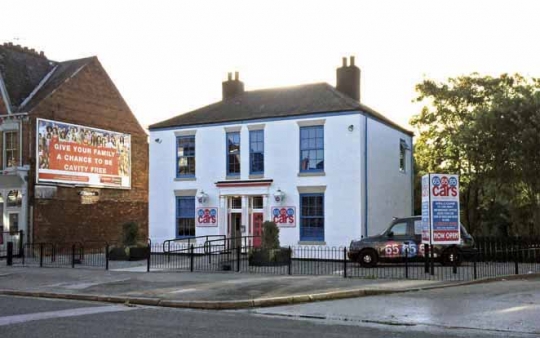